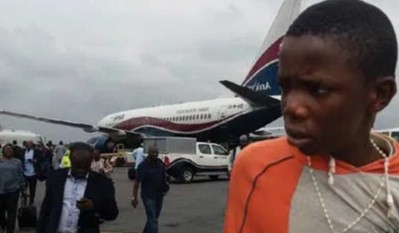 Daniel told journalists then that he thought the flight was going to America as he wanted to travel outside Nigeria.

However, that silly move he made gave him the opportunity of being in school today, after the incident, the then Governor,  Adams Oshiomhole of Edo State adopted Daniel and gave him a scholarship.

Daniel, whose parents are separated, is from a very poor home and confessed that one of the things that motivated him into that dangerous adventure was his dream to be a pilot. Luckily for Daniel, the incumbent governor, Godwin Obaseki continued sponsoring his education and other children popularly referred to as ‘Oshiomhole’s children‘.

Aviation stakeholders wondered what could have led to a teenage boy stowing away in such a dangerous way when 13-year old Daniel sneaked out of an Arik plane main wheel which had traveled from Benin-City to Lagos.  Daniel was immediately apprehended by the security personnel of  Arik Air and handed over to their counterpart in the Federal Airports Authority of Nigeria (FAAN). 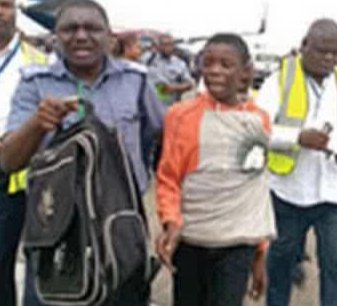 One intriguing aspect of the saga was the claim by Arik Air that the pilot that flew the aircraft reported to the control tower in Benin-City moments before take-off that he noticed a boy in the bush about 200 – 300 meters at the end of the runway. Arik Air quoted the control tower as telling the Captain that they were sending security men to arrest the boy and cleared him for take-off.

The passengers on the flight told Sunday Vanguard that they heard a loud noise as if tyres crushed somebody on the ground as the plane took off from the Benin-City airport.

“We had the sign in Benin-City when the plane was about leaving. As it was moving slowly, we heard a loud noise as if the tyre crushed somebody on the ground and we all started shouting ‘Jesus, Jesus’. It means the boy was already inside that tyre compartment before we left”.

“When we landed at Lagos Airport, the boy came out from the mail wheel, everybody started shouting. But talking seriously, this shows that we have a serious problem securing our airports. This is security breach. If that boy was carrying a bomb, he could have succeeded in blowing up the plane,” another passenger said. 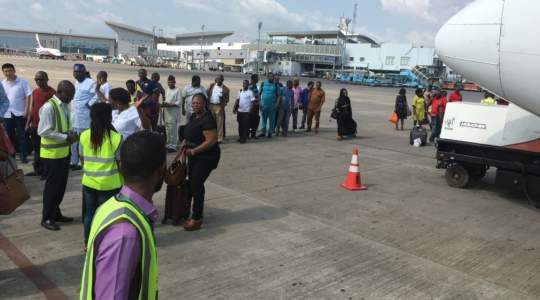 Arik Air managing director, Mr. Chris Ndulue, described the incident as a security breach. Expressing shock over the teenager’s beating of security at the Benin-City airport, Ndulue said, “We are worried by the incessant security lapses at our airports.

As passengers express their shock and disappointments, experts also expressed their surprise over Daniel’s survival during the 30-35 minutes flight. They simply said it was a miracle he made it to Lagos.

An expert, Mr. Chris Aligbe however, stressed that if the distance was a long haul flight, like from Lagos to London, the teenager would have frozen to death, stressing that the higher an aircraft ascends into the sky, the cooler the nose wheel apartment becomes.

Aligbe said that the reason people who stowed away from Lagos to other parts of the world are found dead upon arrival at their destination is because of the long distance. In such cases he said, the airline staff often found the corpses of such people on landing.

“There is no aviation experts that can give you a satisfactory explanation on the incident. The nostril of the aircraft is not designed for anybody to stay in. The boy’s survival was miraculously done by God because the aircraft could have crushed the boy when the plane was retracting its tyres.”

“Although the hole is a bit wide, it is not meant for anybody to stay in. There is no scientific explanation to it, there is no aviation expert or technology that could explain how that boy survived on board that aircraft.” He survived because of his size”.

After the incident, group volunteers offered to sponsor Daniel’s education up to University level but the State Governor, Oshiomole took him under his wing sponsoring his education. 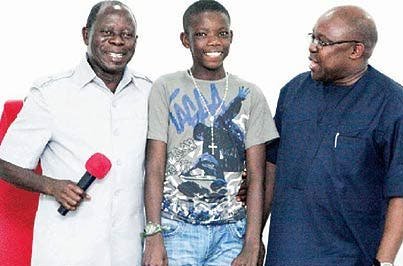 Daniel’s Mother at the time already filed a police report of her missing son back in Edo state when her sister-in-law called from Germany to inform her of the news she had read online about a boy who stowed away via an Arik flight. She narrated her ordeal to Sunday Vanguard thereafter.

“My son’s name is Ricky Daniel. He answers one name in school and another one at home. He is in JSS 1. Before now, he was in a private school Young Scholars, but, because I could not afford his school fees when my saloon got burnt, I now took him to Ogbe Secondary School to continue his third term”, she said. She continued, “My sister-in-law in Germany, who was unaware that we were looking for him, called to alert me of the development. She got the news via the internet. I think she said she read it in Vanguard. She was the one who told me Ricky was in Lagos, that he broke airport security and entered the wheel of the plane heading to Lagos. Soon after she called, my attention was drawn to newspapers by sympathizers and family friends. I rushed to Ring Road where I bought a  newspaper and thereafter I went to the police station to report the matter. He was not used to leaving home”. 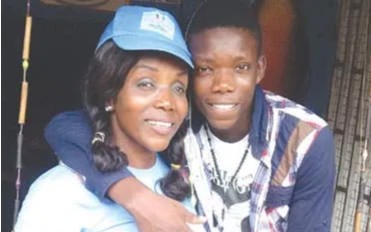 “I left home around 9 pm on Friday for the house of my elder sister who gave birth to pass the night. When I came back the following morning, my daughter told me that she and her brother-the stowed boy- had an argument, that she found him watching a film when she woke up to ease herself and that he broke the television set. The sister explained that my mum-their grandmother-  settled the quarrel but when she woke up in the morning, she could not find him”.

Debunking the claim by the teenage boy that he left the house because he was being maltreated, Madam Ohikhena said;

“ I did not maltreat him, but I don’t play with him. And I don’t joke with my children’s education. I give them the best of education. Everybody knows me, go and ask about me in Oba Market. When we commenced the search for him, his nine-year-old younger brother told me that each time they were watching a film, he always said he will go abroad, that he will go to the airport to enter the plane. He told me to go and check the airport. I did not believe him. He does not have friends, he hardly leaves home. My son thought he was going to America. My only joy now is that he is alive”. 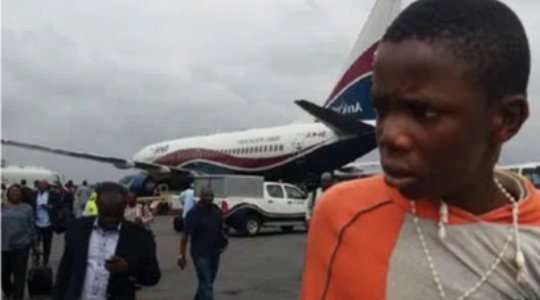 Recalling his experience inside the wheel that day he stowed away, Daniel stated:

“I was 13 years then when I entered the wheel of the plane. Each time I see a plane flying, I always look at it and remember what I did. In fact, now, I feel stupid each time I remember that incident but I believe God wanted it to be that way. If not, I would not have gotten this scholarship and I am from a poor home. My mother is struggling to train us including my siblings and it has not been easy. But thank God, after what happened, our governor then, Comrade  Oshiomhole, gave me a scholarship after he invited me to his office.  Governor Oshiomhole helped me at that time. He discovered me and told me that I should work hard so that I  could achieve all I want in life. He gave me a chance to be educated and I am very grateful to him”.

From statistics, from 1947 to September 2012, there were 96 stowaway attempts worldwide in wheel wells of 85 separate flights, which resulted in 73 deaths. An aviation expert, David Learmont, suggested that no one would be willing to risk such a journey, adding that stowaways who survive usually traveled relatively short distances or at low altitudes. He also attributed why stowaways are prevalent in Africa to the poor perimeter security in several airports