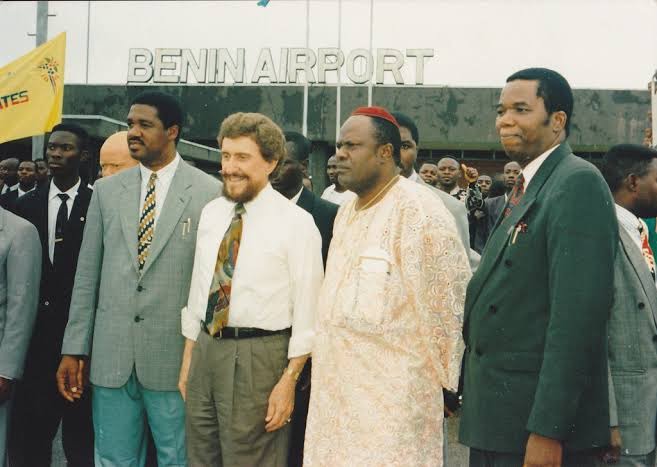 T.L Osborn, a man of God and a prophet from United States of America, visited Late Benson Idahosa’s church here in Nigeria in early 1980, for a powerful program.

When T.L Osborn, was heading back to United States of America, he needed an urgent flight, as he was to go and do something urgent.

When Osborn arrived at the airport along with Benson Idahosa, the plain was already filled with passengers. So, Benson Idahosa, pleaded with the passengers onboard the plain, if anyone of them could stand up for T.L Osborn, as needed an urgent flight back to the states.

No one answered him, but after his fourth announcement, Africa’s richest man, Aliko Dangote, who was then a normal business man, was also onboard in the plain. Aliko Dangote, stood up so that the man of God can catch his urgent flight back to the states.

When Aliko Dangote stood up for the man of God, Benson Idahosa was marvelled at what he did, of which he asked Aliko Dangote the work he’s doing. He replied by saying, “He’s just a mere business man” and pastor Benson Idahosa prophesied into his life saying, “Just as the sun never stop shining and the river never stops flowing, I multiply the increase of your business, riches will embarras you”

The prophecy was prophesied along time ago, and up till now, this might have been what added to Aliko Dangote’s wealth and fortune.

Everyone should learn from this act of humility Alhaji Aliko Dangote did many years ago, as this might have been what made him what he is today.