Why Some Humans Are Born With Tails And How To Avoid Giving Birth To Such.(Pictures)

I thought I should bring to your attention one of those unusual things you may think only exists in the cartoon/movie world- but actually exists among human beings.

People can be born with tails.

It is very rare.

But it can happen. 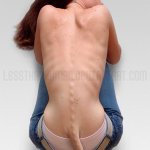 DID YOU KNOW some people were born with tails?

As far as human literature and recorded history is concerned- there have only been about 23 of such human beings that were known and noted since 1880s till now. 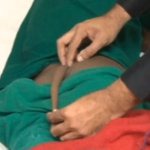 A baby born with tail

So it’s not as common as you think.

It’s thankfully a very rare thing, and mostly quite harmless for those who have it.

Why does it happen?

We don’t know for sure. However what we do know is that ALL human beings while growing in the womb have a tail-like structure which disappears in the second month of pregnancy- so you are not born with it.

But in these people, it doesn’t seem to disappear.

The medical term for it I vestigial tail.That’s what it’s called. As I said, vestigial tails only mean there was an error in the development of the child which causes the tail to persist till the child is born- rather than be absorbed into the body like other babies. 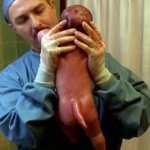 Black baby with a tail

The term “vestigial” is used for those human body structures which are deemed to be useless or not particularly important for human survival. 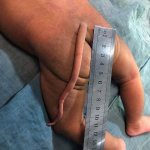 Newborn with a tail being measured

In simple terms, these are body organs you can actually do without. Examples of such structures are appendix, wisdom tooth, and a tail.

A vestigial tail is mostly just skin, fat, some muscles and nerves. That’s all. There is no bones, or spinal cord. They can NOT use it to hold or grasp anything.

And some may not be able to move it.

The treatment is simple: Surgeons just cut it off. That’s all there is to it. 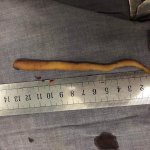 Vestigial tail cut off by surgeons

Anyway I hope you learnt something. Vestigial tails are rare- but they are NOT impossible. It does NOT mean the child is abnormal.

Take the child to a hospital – Not the evil forest, or a garbage dump site by the road.

Now, my question is, imagine you’ve been seeing someone and just when you are about to take the next step you discovered he or she has a grown tail folded or hidden under the pant all along. Will you still go ahead and get married to the person?

Please, I really want to read your views especially for those that believe in true love.

I shared this with some friends and I got different reactions. I believe I will get more views here.