Skip to content
When it comes to the art of literary writing and story telling, two names stand out, Wole Soyinka and Chinua Achebe . These two are up there in the world as one of the best Nigerian Writers and are also respected and recognized.

Achebe was called the father of modern African writer, because “A Man Of The People” by Achebe is a prophetic novel that reveals the future of the Nigerian politics. A great American novelist, Margaret Atwood called Achebe “A magical writer” that carried readers along in his novel “Things Fall Apart” that mother, father, sister, brother, uncle, aunt, the rich and the poor are all involved in the novel. However, Achebe wrote 78 books while Soyinka has written 106 books.

But like it has always been in a world of two good people, there must be one that is better! Look at their work stats and make a pick: I want you to patiently and carefully read the achievements of these great men and comment the best writer between them.

Late Professor Albert Chinualumogu Achebe was a top Nigerian novelist, poet, and critic. He was best known for his first novel and magnum opus, Things Fall Apart (1958), which is the most widely read book in modern African literature. From 2009 until his death, he served as a professor at Brown University in the United States. Achebe excelled at school and won a scholarship for undergraduate studies. He became fascinated with world religions and traditional African cultures and began writing stories as a university student. He gained worldwide attention for Things Fall Apart in the late 1950s; his later novels include No Longer at Ease (1960), Arrow of God (1964), Chike and the River (1966), A Man of the People (1966), and Anthills of the Savannah (1987), The Trouble with Nigeria (1983) and most recently There was a Country called Nigeria, the True Story of Biafra (2013). Achebe wrote his novels in English and defended the use of English, a “language of colonisers”, in African literature. In 1975, his lecture An Image of Africa: Racism in Conrad’s “Heart of Darkness” featured a famous criticism of Joseph Conrad as “a thoroughgoing racist”; it was later published in The Massachusetts Review amid some controversy.

Achebe’s novels focus on the traditions of Igbo society, the effect of Christian influences, and the clash of Western and traditional African values during and after the colonial era. His style relies heavily on the Igbo oral tradition, and combines straightforward narration with representations of folk stories, proverbs and oratory. He also published a number of short stories, children’s books, and essay collections. Achebe published an essay titled Where Angels Fear to Trade (1962) issue of Nigeria magazine, in 1975 he was presented with an honorary doctorate from the University of Stirling and the the Lotus Prize for Afro-Asian Writers, amongst other awards. Achebe was awarded a Rockefeller Fellowship for six month of travel.

The New York Times described him in his obituary as “one of Africa’s most widely read novelist and one of the continent’s towering men of letters”. The BBC wrote that he was “revered throughout the world for his depiction of life in Africa”. Achebe has been called “the father of modern African writing” in 1992 he became the first living writer to be represented in the Everyman’s Library collection published by Alfred A. knopf. Many writers of succeeding generations view his work as having paved the way for their efforts. Achebe was the recipient of over 30 honorary degrees from universities in England, Scotland, Canada, South Africa, Nigeria and the United States, including Dartmouth College, Havard and Brown university. He was awarded the Commonwealth Poetry Prize, the Nigerian National Order of Merit (Nigeria’s highest honour for academic work), the Peace Prize of the German Book Trade and countless number of awards Some scholars have suggested that Achebe was shunned by intellectual society for criticising Conrad and traditions of racism in the west. Despite his scholarly achievements and the global importance of his work, Achebe never received a Nobel Prize, which some observers viewed as unjust. When quizzed about how he felt not winning a Nobel Prize; he replied: “My position is that the Nobel Prize is important. But it is a European prize. It’s not an African prize… literature is not a heavyweight championship. Nigerians may think, you know, this man has been knocked out. It;s nothing to do with that.”

Soyinka met some gifted British writers that inspired him and he started writing short stories, poems and plays.

In 1986, the literary pundit Wole Soyinka won Nobel Laureate award for Literature due to multifarious plays and poems he has written. The Royal Swedish Academy awarded Wole Soyinka with Nobel Prize. And he also won Agip Prize for literature in 1986.

In 1989, Soyinka wrote an essay called, “A Voyage Around.”And since 1960-1990, Soyinka has written so many plays that were featured on Nigerian Television. In 1993, Soyinka was awarded an honorary doctorate from Harvard University. In 1994, he wrote “The Beautification Of Area Boy.” In 1996, he wrote “The Open Sore Of A Continent A Personal Narrative Of The Nigerian Crisis. In 1998, he wrote “The Burden Of Memory, The Muse Of Forgiveness.” Moreover, Soyinka was a professor at the University of Ife since 1975-1999. He has taught at the Universities of Oxford, Harvard, Yale, Cornell, Emory and he was a professor of African American Affairs at Loyola Mary Mount University in Los Angeles USA. In 2001, he wrote “King Baabu” and in 2002, Soyinka wrote his “Selected Poems” In 2005, he wrote “Climate Of Fear, The Quest For Dignity In A Dehumanized World.” In 2006, he wrote “You Must Set Forth At Dawn.” In 2009, Soyinka bagged the Academy of Achievement Golden Plate Award. However, he has won more than twenty national and international awards. In 2014, Soyinka received International Humanist Award.

So who is the best write between Achebe and Soyinka? 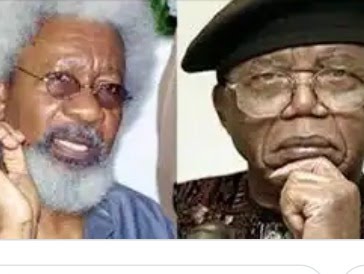